Sleep. All I want is just more sleep. I roll out of bed dreading to start the day. No different than any other day really, but there is a lethargic feeling deep inside me I just can’t seem to shake. I get my robe and head to the living room. I switch on the TV where EBN gives me the overnight news updates. The Entropia Broadcast Network has been the highest rated channel on Planet Calypso since its inception ten years ago. In the dangerous climate all Entropians live in, news is knowledge, and knowledge is survival. Still half asleep I drag myself towards the kitchen looking for a pick-me-up. I scour the cupboards finding only some stale crackers and an empty container of coffee.

After a few seconds of grumbling to myself, I decide a shower is in order. I bypass any chances of breakfast this morning and ignore any morning warnings about immediate hunger. Making my way towards the shower, I hop in and let the warm water shed my listlessness.

Feeling more upbeat, I grab my standard issue orange threads and get dressed. Walking back towards the living room my attention is placed directly towards the TV.

“This is Jermaine Johansson with a special news bulletin, and a Colonist alert that there has been a massive sudden death of Hogglos on the shores of Treasure Island City on Planet Calypso! Is this the work of the government? Is this happening due to the Egg being more active recently? We will have further details as we follow this fast-moving story on the 5pm news.”

I grab my purple and black master coat and head for the door when my comm device goes off.

I head for Twin Peaks and Entropia Transport. Being a weekday, there is always plenty of comings and goings in the office. I look to the hunting section of the job board when I hear the boss shout for me.

“Eggroll! To the office, now!”

I make a beeline for Narfi’s office and notice the Calypso Defense Force briefing him and his wife on the morning events.

“Egg, this is Lantaryis Simoeon, he is a special agent for the CDF.”

Simoeon certainly didn’t look intimidating to say the least. Scrawny build, brown hair, and eyes to match, left much to be desired. CDF soldiers are selected in their early teens. Families enter their willing sons and daughters into a selection pool where the quickest, brightest, and most nimble are chosen. Apparently he noticed me looking at him.

“Is there anything wrong?”

“Uh, no. Sorry.” I can’t help but think his brains are the more elite part of his equation.

“Despite what you may have heard on the news, what I am about to tell you is highly confidential. What was leaked about the Hoggs is true, they are all dead. There are possible threats to the colonists of Calypso; we need to figure out if this is one of them.”

“I cannot give you any specific details under special provisions from High Commander Major Carramone.”

“If you can’t tell us what we are up against, what exactly do you want us to do?”

“Look, I can understand you want as much information as possible, but let me make it very clear, the CDF assures us that no colonists are at risk at this time. Eggroll, you and Jessica are to go back to TI City and see what you can learn about the sudden deaths of the Hoggs. We will be dropping in a few Hogglos from a secure location to help your mission.”

“Why are we being involved,” I asked?

“We have reason to believe we were hit by a pre-emptive attack from another planet. A scientist with intimate knowledge of our defense program has gone missing, and was spotted on one of your transports headed for Arkadia. Entropia Transport is one of the best funded interplanetary businesses out there, and we feel if anyone can help us it’s you guys.”

We watch Simoeon leave the office while we digest what we have learned. The Hoggs are dead. The CDF is worried about a “future” threat, and a scientist used fake paperwork to leave the planet.

“What we do is cross our t’s and dot our i’s. We figure out what’s going on and we do it in a manner we see fit. This stays between us until further notice. Head to TI City and see if you can make heads or tails of what’s going on out there.”

Jess equips herself with Tiger armor and her Enigma L3. I grab my Jag armor, Apis gun and we head for the teleporter. We select TI City from the destinations menu and get ready for what was about to come. 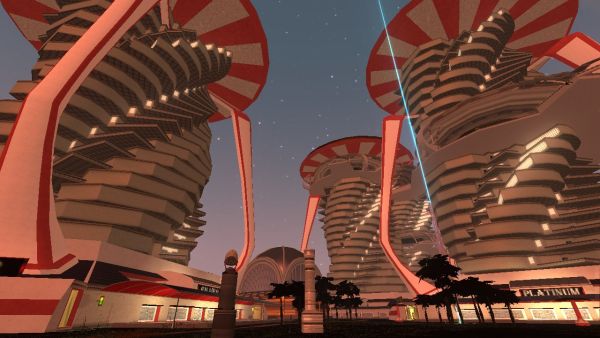 TI City is a complex, and home to towering spiral apartment buildings overlooking the blue waters of Calypso. Many stay on these shores for its natural beauty. Others prefer TI City for the fresh coastal air. We make our way slightly East to find the decaying bodies of the Hogglos.

They have been dead for a couple of hours now it seems. Hogglos are large beasts with a seemingly larger mouth to match. Their stubby legs create the sensation of a wobbly, thundering herd. Their sense of smell is impeccable, and they are known to attack from far distances. It is important to stay downwind to limit or avoid them catching your scent. Today we don’t have that worry. Today we find out just what the hell happened here.

The sands have been cleared of any random colonists and media. We see several soldiers from the CDF keeping the area preserved for clues. The first Hogg has blisters on its skin similar to boils. Jess looks slightly sick, and turns her head.

We check the loot in the first Hogg with not much to reveal. Some ammo, a few pieces of wood, and some oil is all to be found. Only a few steps away another Hogg has similar signs of distress. Searching the loot revealed more of the same, oils and ammo, until Jess discovered something.

“Hey. Underneath his head, what…is…that…?” I move the head slightly to display a small, curved, broken piece of glass. It seems like it was from a vial of some sort.

“Jess, if this is from a vial, who placed the vial here? And why did they do it?”

As we examine the broken glass we are disrupted by a signal from our voice communicators.

“Eggroll do you copy? Eggroll?” I press the button for intercom.

“Yes, I copy, are the Hogglos en route?” As soon as I asked, seemingly from out of nowhere, a transport appears overhead.

“Clear out!!!” someone shouts. A few Hoggs drop into the sand as we intently watch their movements.

“Are you seeing any changes to the Hoggs Eggroll?”

“Simoeon, no. I can’t find any reactions to the Hoggs. It seems as if everything is…normal?”

“If that is the case, whatever caused these Hoggs to die has an immediate effect and quickly dissipates. Did you guys happen to find anything at the scene?” I press in the leg of my pocket to conceal the evidence I confiscated.

“No, Simoeon, we did not find anything.”

“The CDF will finish processing the dead Hoggs from here. We will meet again if there is any new information on our side. Tell Narfi thank you for allowing us to borrow your talents.”

We head towards the teleporter and quickly get back to the office. I hand Narfi the piece of glass and tell him it could have come from a vial of some kind.

“Do we have anyone we can trust to analyze this glass for possible trace?”

“Yeah I think I know just the person. Give me a few hours I will see what I can turn up.”

With that Narfi makes a phone call, tells us to wait here and hurries out the door. We wait around for quite some time. It has been about 4 hours when Narfi reappears.

“We have a serious problem.”

Worried, I ask what it is.

“Your early conclusions were correct. It was a vial. It seems that whatever was in this vial was a neurotoxin. It is designed to kill and kill quickly. But that’s not all…it’s RDI (Research & Development Institute) tech!”

Stunned. Did I hear that right? The CDF told us this was a foreign attack. That a scientist went missing. If the RDI released this vial themselves and the CDF knew about it, what are they trying to cover up? Is there a real threat after all?

Jess has panic in her eyes. It’s obvious from a mile away. Narfi knows it and goes to comfort her.

“We will figure out what’s going on Babe. We have the means, ability, and dedication to figure out what the hell is happening. Eggroll. Do you have any friends on other planets right now?”

“Yeah. I have two friends on Arkadia, Jennifer Jenny Ferr and Nora Vjera Mills. I will try to contact them and see if they are hearing anything on their side.”

I grab my comm device and give Jenny a call. Ring…Ring…Ring… “Hello! This is Jennifer; I can’t come to the phone right now. Leave a message. Laters!” Damn! I try Nora. Again, nothing.

“High Commander, it’s Simoeon. The Lost Renegade crew couldn’t figure out a thing. We are in the clear.”

To think how I wish I was still lethargic and not fearing for the lives of everyone. The CDF is ready to kill. I can’t reach my friends on Arkadia who might know something. It’s time to see exactly what’s going on; I grab my gear and head to Chug’s Hideout.

There are many unsavory people who roam around Chug’s. The most unsavory of them all is The Deserter. The Deserter will surely know something. He was one of their best soldiers before getting “burned” during a bad ops mission a few years ago. He wears a full facemask that shields everything except his eyes. He was badly scarred during that mission and he hasn’t let go of the grudge against them since. The CDF is smart enough to let him be, under surveillance of course. 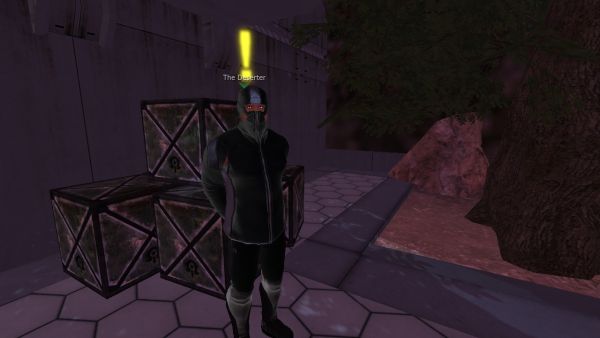 “Why are you here Eggroll,” asks the Deserter?

“I’m here about the Hogglos. What do you know?” Information from shady characters isn’t free. I hand him 25,000 mission tokens. It will be enough for the time being.

I hand over the glass and inform him about the neurotoxin it contained.

“What you are discovering is what I have feared since I was burned. That what you are holding relates to a project that was green-lighted during my final days as an agent. It was code-named back then as the swine flu. The Hogglenza was being developed as a quick strike toxin that could target a specific creature. It was called the swine flu because they wanted to try it on a big food source first. You might not have realized this, but they sent you there as a test. A test to see how long the effects of the flu lasted and if they were successful in keeping the strain to only attack in isolated cases. The goal it seems is to create panic in the citizens and blame another planet. They want to expand. They are preparing the attack. The virus will be altered to attack colonists. The iron will strike while it’s hot.”

Alarmed I make my way back to Twin Peaks as fast as I can. I run to Narfi’s office and explain the situation.

“Sir, the CDF wants to kill the people on Arkadia. They are going to target our own colonists next to make it look like an attack and fool the people into starting a war.”

“Eggroll, Get to Arkadia quickly. Everyone is about to die…”