As you may, or may not know, i have been returning ingame in february this year, after a ~ two years break.
A lot of things have changed, and once i grabbed my Bukin rifle again, i actually had to PM a friend to ask how to shoot creatures.

I spent quite some time picking things up, reading forums, patch notes, re-learning the game, before i can actually get back to work

Couple close friends, aswell as DM for her interview in the quarterly magazine, asked me what were my goals in EU. And, i actually didnt know!
So i came to think, since i always spent more time helping friends or people in general, and got back to my general idea, aswell as developed a bit in what i actually would like, for myself, to achieve in the game.

I always admired Ardorjies thread on Arkadia forum, where he lists all his EU goals, so ill pinch his idea and start my own list

I will only list my goal for the actual year, since it is how i used to plan ahead, and keep goals to reach.
So this will be my targets for 2021, based on my gear, how fast i can skill, and how much i can afford.

Please note that i hardly crafted or mined in the past, and i also chipped out valuable skills, and sold my gear (0x0 T8 / Eron Soulgrinder T4.7) when i left.

Status as for returning in Feb~21

Staff member
Moderator
Official Moon Shopper
Virtualsense Media Team
Such a good idea
I would normally just amble around with no direction at all in game. I think I would have done much better if I set myself specific goals.

Besides, to me surprise, finishing Bahri stage 5 Quwa (Only noticed Moftah " ? " When i came back to village, I finally got my sword to tick! 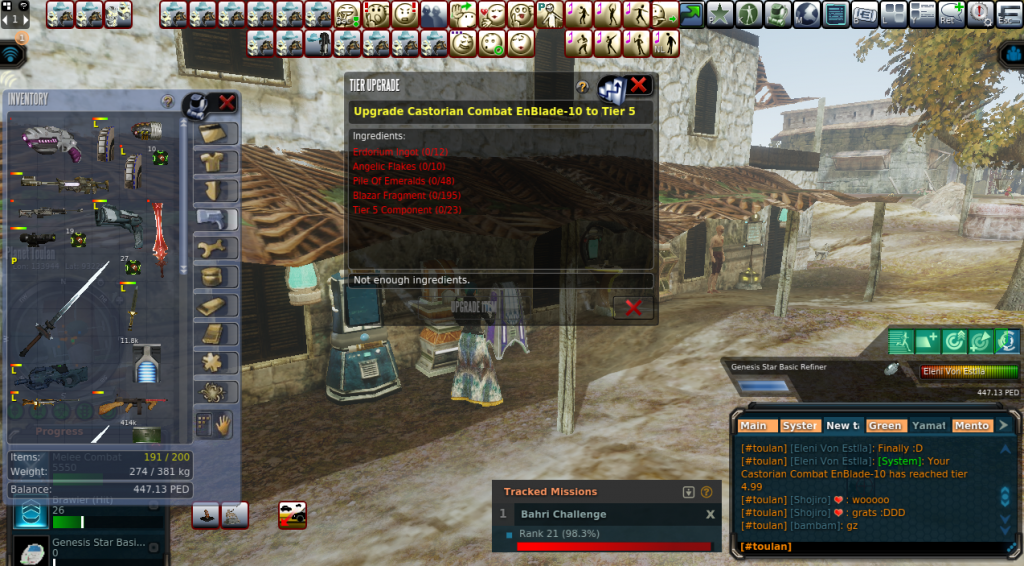 Very exited about this, and off to Tier it now

Very nice, glad to see that Tier up your sword won't cost you very much!

And its done haha!
[System]: Your Castorian Combat EnBlade-10 has reached tier 5.00

Over all a slow month.
Lot of changes in RL, plus side projects, made me focus more outside the game.
Should get back plenty into it by the end of June.

Slow month again, mostly due to me being over~confident.
Cycled much more than usual, but decided to grind on the VU, which led to lower skillgain.
Though i completed 3 or 4 repeatables, and brought Duhols to rank 24.5, but since i take all skills on longblades, this have had a poor effect on the total skill counter; though major progress in the profession; also repeatable didnt bring any attributes, so no joy there either.
Only really missed out on the looter profession, but i noticed that early enough, and decided to continue.
So i am still happy, just didnt go as planned.
This month will be slow again, since i had to use a fair bit of PEDs for a side project.
Overall i am still in-line with my end-of-the-year goals.

Volunteer Mentor
Yamato Pilot
VCAT Team Member
So, i have been off for something like, 6 weeks?
Thats the result of 2 weeks of game in between.
So this log will be lacking a bit of results, but better picking up now, for whoever was following.

I think i was mostly doing codex and dragons on NI (only real mob i love out of Toulan) , and then went to Arkadia to do some attribute codex.
Once coming back, i just shot barbella Z12 for about a week to get into the game shape again, then Cuhof 01, so nothing crazy.


WILL UPLOAD THE SKILLS THEN THE TABLE LATER

Volunteer Mentor
Yamato Pilot
VCAT Team Member
Another slow month, really, as can be seen in skill gains; but with good progress on tiering: This S.4 is really shaping up! This is very rewarding!
It start getting tough to rise skillpoint by now aswell, as for ~ 0.0077Longlade per tick, and it wont get any better.
Those VUs are really taking me astray from this list though, i blame the team!
Oh ya and this new VU has been pretty time consuming too, to research, test, guide and talk a lot instead of shooting >.<

I worked mostly on my little budjet, mostly at ~25dps and to rise HPs and defense a bit.

Still calling it progress, what is done is not to be done

Volunteer Mentor
Yamato Pilot
VCAT Team Member
Okay so today was another great day...
Last night i finally reached T4.99 on my S.4 Rifle, and upgraded it today during the warp schedule. 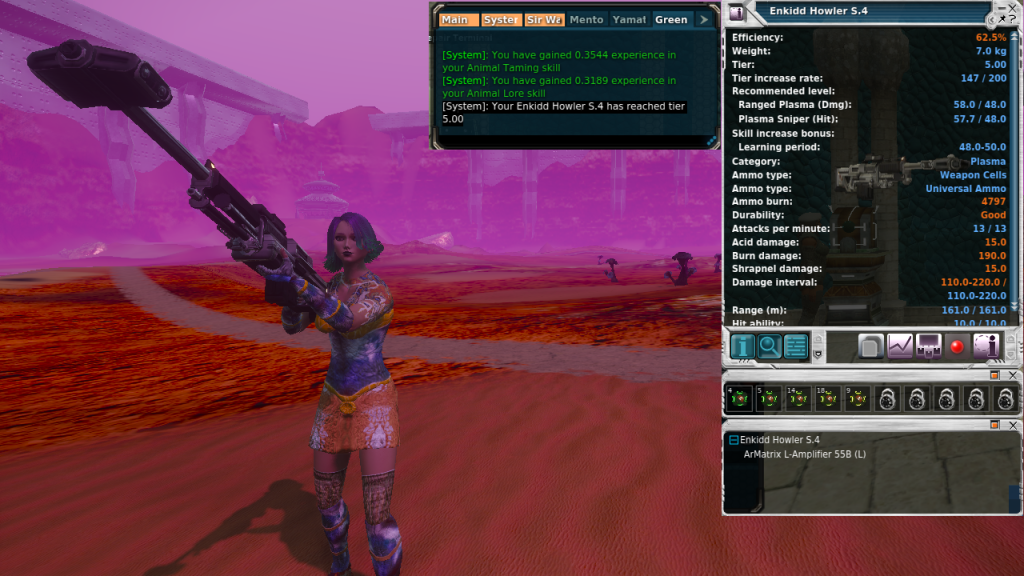 Little story goes with this rifle, as always.
When my mentor convinced me (without effort) that plasma was the path i wanted, i then bought a few horrible items to train this.
And along the way, pretty early in my life, early 2015, i happened to see this rifle.
In the old time, tier rates were different for all 10 tiers, so a good tier weapon was pretty impossible to find.
But this rifle had it all. All tier rates were 130+, which was pretty exceptional if you ask me.

I was ~Lv20 plasma when i bought this rifle, my highest Lv was before then Lv20 explosives, and not laser nor BLP, because i couldnt be bothered with punies, even at the beggining.
I kept this rifle in my inventory through all the years, to remind me what i wanted really.
So i kept training, shooting plasma, slow, slow plasma, and eventually got to be able to finally use it.

But by then a lot happened.
This was not a one-shot kill weapon anymore, when Divine chip was realeased. So, like a tango or any other "pvp" weapon, that went down the drain.
Then bigger healing happened, then armatrix happened : Damage for all, on a budjet.

In the end, these weapons have been demoted pretty fast, but i kept on it, and it still shots Temple.... Invaders dead.
So that works for me

In the end pretty happy to get another tier on it.
Was T4.44 four weeks ago, and it is pretty cheap to cycle, so im very happy, and the damage totally fits my budjet, which is where i pair very well with it now.
The other reason i totally went for plasma is... that you cannot shoot what you cannot see. Hence the range.

And lets be honest here, for a rifle i paid TT+100, it has already been paid back a hundreds times, even if only for the fun it gave me