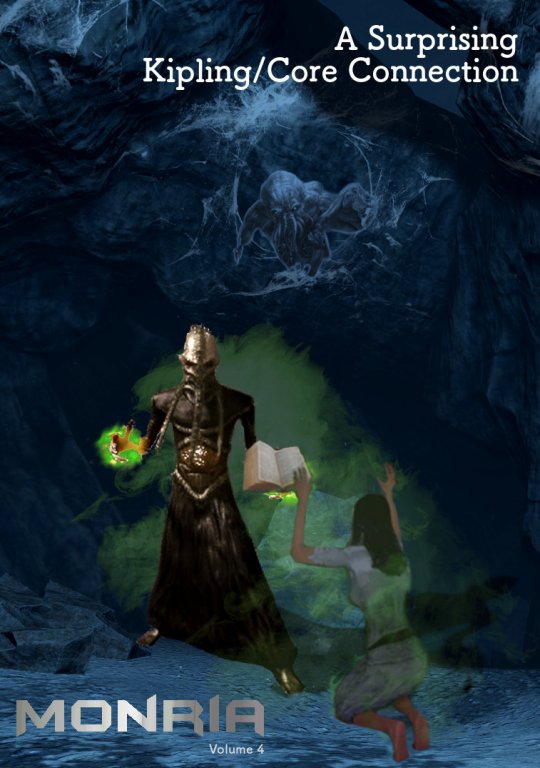 It all started with a simple parchment paper with a Rudyard Kipling poem on it that Core found nestled in the brush in the West Crater. The poem had dark undertones that led to many questions, and that's when the research began. However, Dark Moon Enigma was approached by Gothgorath who claimed to be working on the inside with the Cultists and could feed her valuable information about their activities. Goth's information thus far has been critical in Monria's survival against Cultists and other Moon creatures.

Information led to the recovery of a file cabinet, also from the West Crater, that the Cultists were protecting. We soon learned why. An ancient journal was found in a secret compartment within the cabinet that not only revealed the devastating history of the Cultists prior to their exodus from Earth, but also the discovery of Monria by the Deep Space Extraction Corporation (DSEC) and their struggles as the first Moon colony.

Dark forces continue to play a role with the current Moon colony that took over governing Monria in November 2015. This book continues to chronicle the Kipling connection, especially with Core, but the challenges have escalated and it's no longer just a physical battle with the creatures. It has now become a critical battle with advanced technology that the Cultists possess, and a need to employ desperate measures to avoid being overcome by the darkness that has affected far too many.

DME continues to unravel the mysteries and secrets of Monria with startling revelations.

Right click on the link below and open in a new tab to read:

Staff member
Moderator
Community & Media Manager
Virtualsense Media Team
VCAT Team Member
This book is now finished and will be published tomorrow (Friday, Oct 19th) sometime before ship duties barring any issues. Anny has to add her magic touch to everything so it looks like a book. I'll add the PDF link in the first post when it is ready.

I'll just say this ... things are never what they seem

Staff member
Moderator
Community & Media Manager
Virtualsense Media Team
VCAT Team Member
I did a few minor edits to the book and swapped out the PDF link in the first post with the more current one.

Yes i did have time to read this one aswell today

I appriciate the work/love you guys have put into these books.