The following lead-in story has contributions from 3 members of the VS Media Team writers - (1) Anhithe; (2) DME; (3) Pinthas.

There was always a division of DSEC focused on the possibilities of outer world research, but the most radical group was extremely secretive. This group consisted of John Mulholland (one of DSEC’s leading Petrologists), Professor Joseph Armstrong (an expert in the field of software and advanced AI studies), Dr Susan Knope (a Micro Mechanics Engineer with expertise in nanorobotics and cybernetics) and Dr Adam McKensie (a Physicist working in the field of String Theory). These four isolated themselves from other teams and always seemed to be working on projects too far-fetched to be taken seriously by the suits. (1)

The group first started the Outer Limit Robotic Mining Project as a way to travel great distances and set up unmanned mining operations in the most hostile environments. This would give DSEC a greater number of locations than their competitors without any risk to their employees. This went down very well with management, and the top secret project was given the go ahead with unlimited funding, and absolutely no outside interference. (1)

However, we recently learned that in their off-world explorations they discovered what they now call DSEC-9 and set up operations that did a deep-dive into Artificial Intelligence and downloaded 7 years of data into the Holoroom that Professor Armstrong called DEC (Detached Ego Consciousness). (1)

Narissa Thompson was a member of the original DSEC Security Team that worked with Trip Kaminsky, DSEC's Top Scientist and his team who discovered Monria and explored the depths of the underground caves and caverns where Narissa had gone missing and presumed dead ... until now. She went through a harrowing experience with the Cultists in another dimension and was under the control of K'Tan Partathus who used the Maladrite Elixir during her abduction from the Monria underground caves as a means of mind control. (2)

As part of the original DSEC Security Team, Narissa was savvy in the ways of deception and distraction, always alert and connecting the dots where they needed to be connected, which proved to be a bit of a struggle at first in captivity, but she learned how to play into her hosts' behavior and motives for what they wanted her to do. She was in survival mode, and survival is just that; making sure that one survives. (2)

They tell us there's a rulebook, and we should follow the rules. However, sometimes rules don’t apply. We may refer back to the rulebook, look for the ground rules for the circumstances and situations that we find ourselves in, but they don’t always exist. In the field, you never know if your opponent is more experienced with better skills. It is far more advantageous to be prepared as much as possible, and that includes teamwork. A well-trained team becomes more in sync with their efforts the longer that they work together. Training, not the rulebook, enables a team to move through challenges and overcome hurdles. Coming out on top is basically coming out alive. You could be harmed, injured, or damaged in some way but ultimately, you survive to face another day. (3)

This was the day that Narissa was going to face Trip for the first time since she went missing when the team couldn't get to her before she was transported to another dimension by K'Tan Partathus. She survived her ordeal and made it back to Monria, but has also remained in the background and silently monitoring activities. It seemed not to be that disturbing until recently when she learned about DSEC-9 and what the rogue team was able to do with full support of management. (2)

Narissa has been quietly gathering what information she could at DSEC-9 and was ready to reveal to Trip that she's very much alive and has info to share with him. However, there are unanswered questions that relate to both Decca (Leader of the Cult of Shut'thend) and HM Queen Nara (Ruler of Planet Toulan), not to mention the Stranger from Toulan dealing in Dark Nawa. Narissa is on a mission to learn everything she can, but also how she can help. (2)

During Narissa's indoctrination at the hands of K'Tan Partathus and the Maladrite solution he had her bath in daily to reach her cellular level, it exponentially expanded her consciousness beyond anything she could imagine, but then she was told that she's not who she thinks she is, and that those not of her status had limited consciousness and unable to fully fathom the true understanding of the cosmic universe. (2)

Her only thought was ... will Trip be open-minded enough to receive and accept her information, even thinking it plausible, or consider that she has lost her mind? (2)

Oh, and ... Narissa knows that Trip met Nara on the same day that the equipment in the secret mine became inactive.

Date | Saturday, July 10th
Time | 00:00 -to- 23:59 game time
(to determine game time -- click on your System tab in the chat box and then press U ... or
press the period key if you haven't remapped your keyboard since the graphics update)
Location | Entire Moon

Right click on the following links and open in a new tab -- these are PDF files for downloading:

Also, here are links to help you navigate Monria, but also find items in shops and shopkeepers:
Right click on the links to open in a new tab.

HEADS UP ... if you haven't done so already, make sure you pick up the:
For those still working on the chapters mission (The Order of the Elder Gods), here is Ant's response to those who have made comments, suggestions, and have questions -- hopefully this will help.

This too is a downloadable PDF file -- right click and open in a new tab.

There was a total of 542 globals/hofs during the 24 hr event time.

You can see all of the results in Ant's spreadsheet here where individual global/hof totals are included.
Right click and open in a new tab.

RULES ON HOW YOU WIN 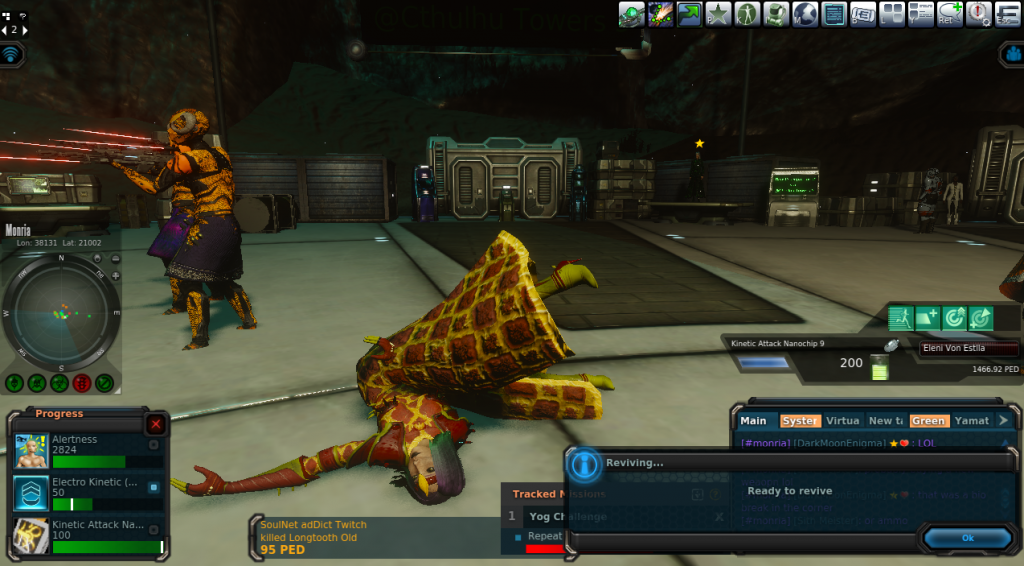 Staff member
Moderator
Community & Media Manager
Virtualsense Media Team
VCAT Team Member
Results have been added to the first post, and I will now log into the game to start paying out the prizes.

Congratulations to all the winners.