Book of Life Page 5 - Regarding Avatars

VCAT Co-Mgr
Well, I've done it. I traded my tokens for Page 5

I looted all 40k Mirsal Tokens from Card and Cuhof instances. I had been targeting 60k for a Medium Apartment, but I've had a change of heart. After considering a variety of scenarios, I decided that a small apartment (M1 in particular) will be the perfect place to begin the next stage of my life. I've waited long enough. 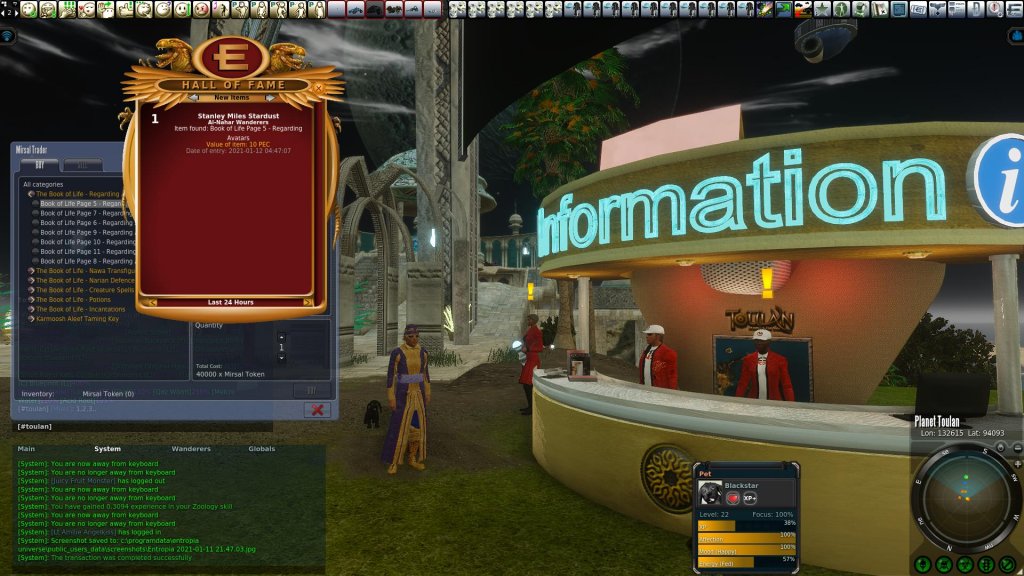 Now we just need to get you an audience with the Queen to collect your deed.

VCAT Team Member
Virtualsense Media Support Team
Wow Miles - super happy for you! Congrats! Cant wait to see what you will do.

Huge gz! Some serious effort behind farming all mirsal by yourself ;)

VCAT Team Member
Awesome job! Grinding CUHOF for mirsal tokens was my first thought of how to get an apartment. It would take maybe 30 days of 4-8 hour grinding?
I have been busy lately trying to keep the ball rolling, but even the small apartments on Toulan I think are generally phenomenal.
Best to your endeavors with the Apartment and in Entropia.

Kain Dewey Fall said:
Awesome job! Grinding CUHOF for mirsal tokens was my first thought of how to get an apartment. It would take maybe 30 days of 4-8 hour grinding?
I have been busy lately trying to keep the ball rolling, but even the small apartments on Toulan I think are generally phenomenal.
Best to your endeavors with the Apartment and in Entropia.
Click to expand...

So a couple of notes about my grind. It was about 6 or 7 weeks, but It was far from all I did. On average I was running the card missions (at least Shamsdar and Baydar) 3 times a day, and CUHOF 1 and CUHOF 2 also 3 times a day (1 key each). I ran the bigger CUHOF instances rarely, as the cost per run is too high, and the increased Mirsal return is too low. I also did regular hunting, so I wasn't cut off from occasional big loots, and I was harvesting a lot, as well as crafting, mostly textures and furniture. The balance between running instances and doing other activities at any given time was guided by Mirsal drop rates. Harvesting, in particular, was a nice antidote to feeling like a cave-dweller.

If Misral drops felt too low (below average amounts) or too infrequent (only 1 in 3 boxes) I would do other things. If the Mirsal drops felt strong (above average amounts and almost every box) I would run more. I found these tactics yielded Mirsal most effectively/sustainably while preserving my sanity. In the end, all I had to do was hold aside 400ped worth of loot (40k tokens) over the course of the grind, which is not really that much.

I used keys because I had a large inventory from long ago, although recently I had to craft some more. That saved my Nawa Cells for the card instances. The shorter instances provide more loot events, thus more opportunities to loot a page, and quicker feedback about Mirsal drop rates. Nothing was more disheartening than completing CUHOF 4 or 5 run and getting 0 Mirsal. A run through CUHOF 1 with 0 Mirsal was just a blip.

Now that I am done saving, I am still running instances. The markup on tokens is too good to pass up.

VCAT Co-Mgr
The 'Deed' is done

I have claimed Nahar Towers 1st Floor Unit M and it will (almost) always be open to the public. 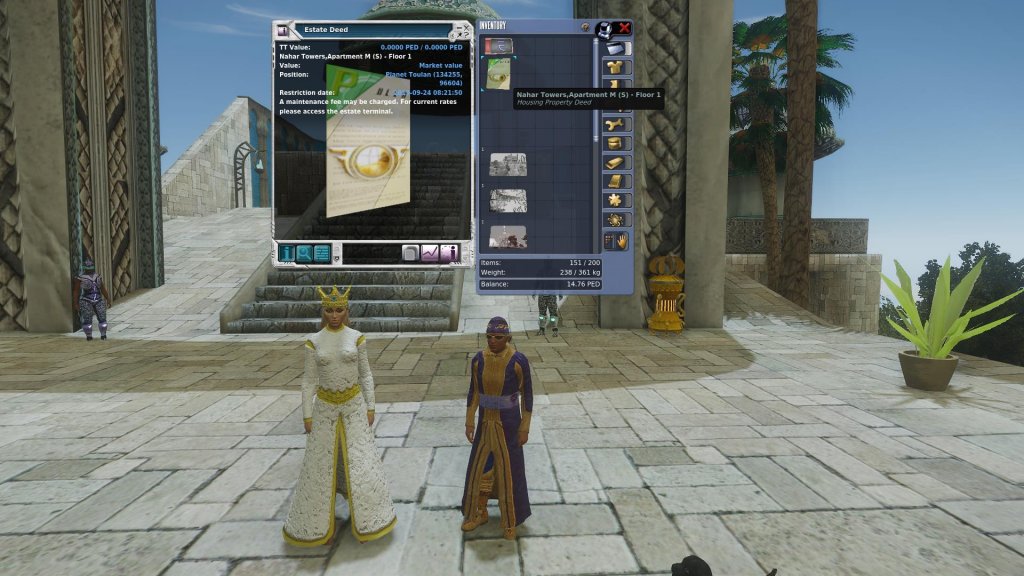 VCAT Team Member
I love your outfit. The outfit of what I presume is the queen is awesome as well. Great Fashion going on there.

We need to design a handbag for the Queen though, every Queen has a handbag I think.