Preliminary Introduction | Road to the Reveal 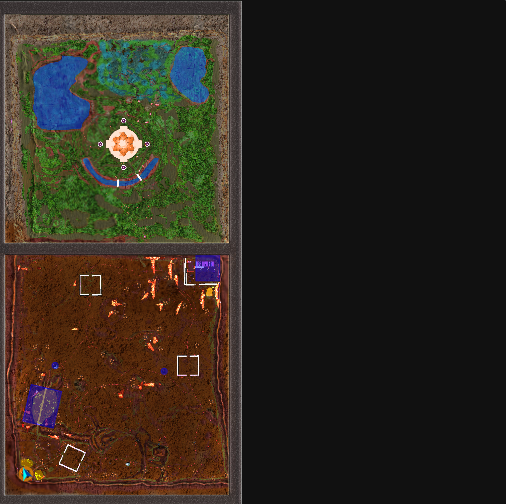 I know that there was most likely a bit of disappointment that the 3rd map section at DSEC-9 wasn't released, but that's because the decision was made a while back to actually make the 3rd and 4th sections into one. A great deal of work has already been done and there is still a lot of work to get to before the next VU in September. However, I am very excited about where this is going, and I am looking forward to doing the weekly write-ups with lore, clues and allowed photos, and taking you on a journey into a glimpse of what you might expect without revealing too much so that it's not a surprise ... Ant likes to surprise, it's part of his fun bits with a VU.

I will continue to use this thread for the weekly write-ups beginning with Monday, June 6th so that all weekly write-ups are in one place. This will be a fun challenge for me to be able to convey what you might expect with the final map section at DSEC-9, without giving it all away, and allowing your speculations to drive you mad.

Here's to a walk down mystery lane.

Times have been troubling, anxiety has been high, and the unknown has been unnerving to say the least. Meetings between DEC and Queen Nara, Toulan's Oracle (Sahira) and Queen Nara, Toulan's Oracle and Monria's Oracle, and of course, with Decca in the middle of everything giving out threats and poking her nose into everyone's business, it has raised red flags and alarms for the safety of Toulan, Monria and especially DSEC-9.

Well, another meeting was had recently between DEC and myself to see if we could somehow gain intel on what was happening in the unfinished portion of the DSEC-9 map area. To my surprise, DEC had already been working on a more advanced DEC-CAM Drone that would help facilitate capturing images. He's excited about this because it's his most advanced fixed-wing drone to date with up to 90 minutes flight time. It's able to break ceiling limitations, as well as achieve high-precision accuracy. Its versatility allows for greater maneuverability and can operate in the harshest of conditions. It boasts a stealth mode with a built-in invisibility cloaking mechanism. Sounds like his efforts have paid off and produced success.

DEC likes to talk nerdy stuff, so when he has an ear, he takes advantage because he rarely gets company who will chat with him. I don't mind, I just act like I know what the hell he's talking about and leave it at that, but I became rather excited myself when I learned that this new advanced DEC-CAM 9 Drone would be able to breach the uncharted area of the DSEC-9 map to gather intel. Maybe we'll learn exactly what's going on and be able to become better prepared for what we might face.

It's been a little less than a week now since DEC built the new DEC-CAM 9 and my anxiousness is getting the best of me because I want to see something, anything. I paid another visit to DEC to follow-up and he said my timing was good because he had something to show me. I felt my pulse race and experienced heart palpitations. I know that Decca is involved in some way, but to what extent. Her dark forces are evil, and her control over the Cultists scream danger, so anything is possible.

DEC said the first image was basically of a section of the terrain, and after having a look, it was quite telling. 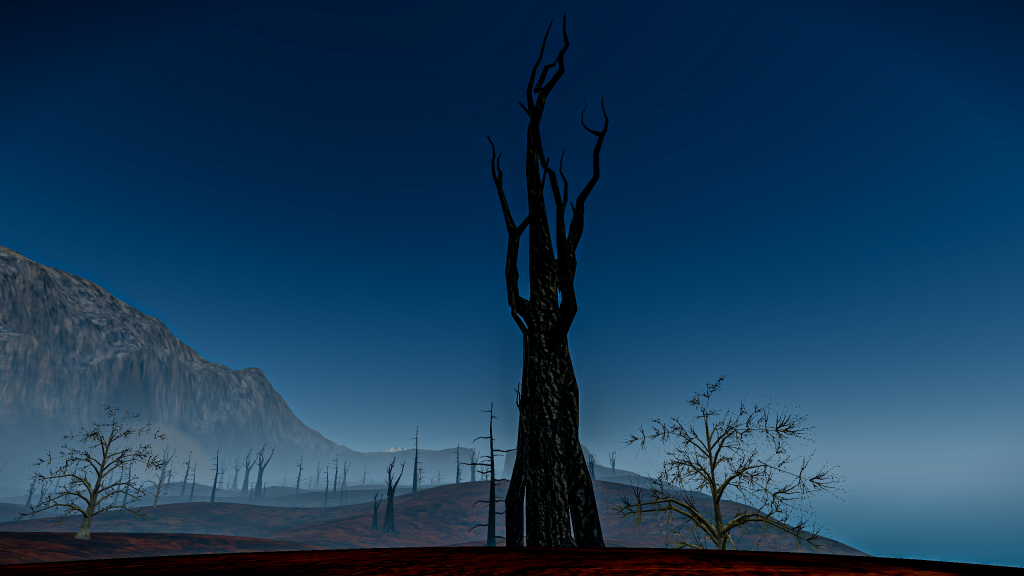 Dead trees, a massive mountain with a circle of haze in front of a portion of it, there's what looks like water to the right, and in the distance a sort of opening. It looks a bit creepy, disturbed and death-like.

This can't be good. We better keep security on alert at all times.

NOTE
There will be 12 more Monday write-ups with lore, clues and a photo, and as we get closer to the next VU, it will become more revealing. However, keep in mind that what is shown may change depending on needs. The lore will be real, and you'll have to pay close attention in order to pick up any clues as to what you may expect. Sometimes they'll be subtle, sometimes not.

DISCLAIMER
All content is in development and subject to change. Specifically, photos shared may end up looking differently due to movement of assets and tweaking of lore. Oh, and ... we absolve ourselves of any deaths occurring from introduced or perceived horrors.

Volunteer Mentor
Yamato Pilot
VCAT Team Member
Toulan Historian
Life is all just a cycle, and History just repeats itself. Once again. Another time. In another place.

Seems to me the Fate of the Temple has spread out, not like i didnt try to warn them.


Oh! And forget about that flying rug!
Now i want a drone!!

And again another great tease......

I just got back to Toulan again after yet another trip to DSEC-9 today. I also started the mission and got the access card and laptop 01 for now, I will try get the rest in the coming week/weeks tho.

Cant wait to see the next Mondays teases tho

VCAT Team Member
Is that the Lotus temple i see peaking out over the mountain?

Littlestar b-k said:
Is that the Lotus temple i see peaking out over the mountain?
Click to expand...

I have no idea what you're talking about.

Eleni Von Estlla said:
Oh! And forget about that flying rug!
Now i want a drone!!
Click to expand...

Carefull what you wish for , soon you'll be looking to loot 1100 red wires fragments

I knew what you were referring to

... I just can't confirm nor deny, nor respond to any questions along this path of the gradual reveal ... but it's going to be fun to see what everyone's responses are ... this is why I mentioned to pay close attention, especially to my comments about what I also am seeing in the photo.

Dea said:
All I can think is "I'd go camping there"
Click to expand...

As the reveals unfold, you may take that back.

Littlestar b-k said:
Is that the Lotus temple i see peaking out over the mountain?
Click to expand...

I just zoomed right in, I don't see the temple in it lol

But this is the third/fourth area and the temple is in the second area, so in my opinion the walls would hide the other areas anyway when you get close to them. This seems to be taken maybe somewhere in the middle or the right side of the new areas. I wonder if that means we will get the Wahesh normal ones in the sea next to the land?

Hmmm I'm getting very curious, can't wait till the next teaser!

VCAT Team Member
Is it monday yet ?

Hally said:
Is it monday yet ?
Click to expand...

It HAS to be Monday SOMEWHERE. Also, happy hour...

Staff member
Moderator
Community & Media Manager
Virtualsense Media Team
VCAT Team Member
I didn't want to neglect letting everyone know that Ant was the idea man behind the Road to the Reveal (ok, I gave it the title but it was his idea) ... it's the first time in all the years we've been together as a team that we've done something like this, but for me, it's a double-edged sword, and probably more torture for me than it is for you.

Why? ... you ask ... because I know what's coming and I am not only excited about what we're doing with the final map area at DSEC-9, but immensely excited for you guys to get to experience it. It will be my favorite for many reasons, but you'll understand that more later.

I already have 4 more Monday photo reveals and lore to get into, and the closer we get to the next VU, the more revealing the photos will be, and the darker the lore ... be afraid, be very afraid.

The DEC-CAM 9 is busy collecting intel ... just be sure to employ your best critical thinking when each Monday post is made.

Volunteer Mentor
Yamato Pilot
VCAT Team Member
Toulan Historian
Is it the end of the world yet?

Eleni Von Estlla said:
Is it the end of the world yet?
Click to expand...

4 hours and 22 mins to go since its a week later, not that im counting

The full purple moon sheds little light on the desolate environment that has come to be known as the final map section at DSEC-9, and yet to be named. An environment that clearly appears to be devoid of all things living, or is it.

We know from previous experiences that an unknown portal on Monria had been breached by Yog-Sothoth. Not that long ago, Decca had breached the security at DEC's Holoroom at DSEC-9 delivering threats. We also know, based on the experiences of Pinthas (Cthulhu's half brother in human form) that Decca and her evil Cultists use advanced mind force technology, but is it at a level that could breach the heavily fortified and secure DSEC-9 expanse? Another question might be, who put the fortification in place that requires such advanced technology as the DEC-CAM 9 to get through. The more we evolve to bring new opportunities to our ever-growing community, the more we become an intrusive threat to the dark, evil forces, and ... they will stop at nothing to block us.

The DEC-CAM 9 scanned part of the outer perimeter and captured more than dead trees. Bright-colored boulders are strewn about, but the most interesting eye-catcher is the portion of a small column of stone. I asked DEC if there was more, but he said the DEC-CAM 9 was on a specific course and missed getting more. Additional perimeter scanning is on the agenda.

Even this little piece of unknown evidence tells me that at some point there was life, and that building blocks were created and used, but for what? The more evidence that surfaces, the more I am convinced we have much to fear. We see barren land, not conducive to producing much of anything, a land that looks and feels dead but also gives a sense of evil.

Let's hope that DEC-CAM 9 captures much more to give us clues as to what's happening at the final map section of DSEC-9. 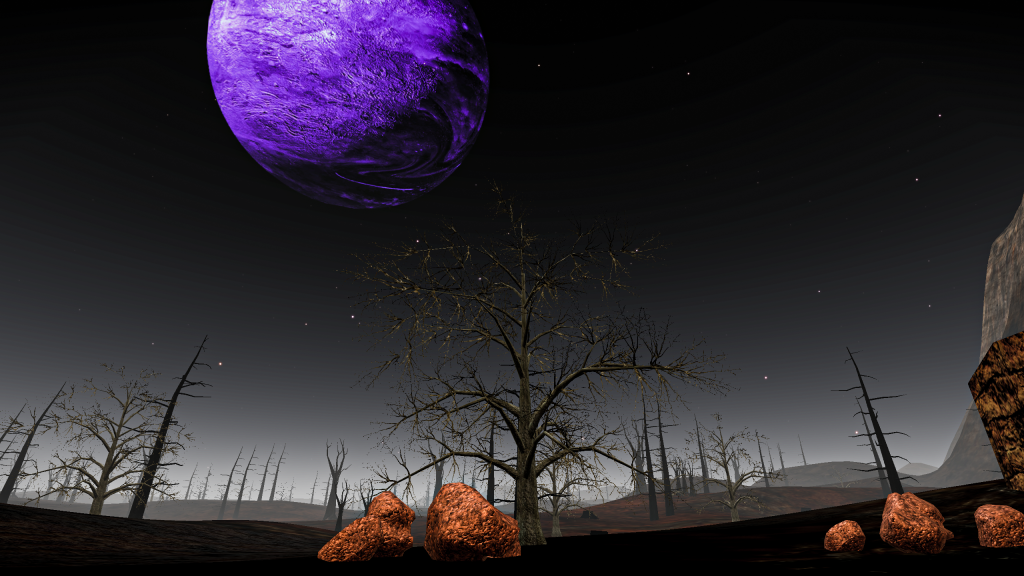 Let the speculation and madness begin.

DISCLAIMER
All content is in development and subject to change. Specifically, photos shared may end up looking differently due to movement of assets and tweaking of lore. Oh, and ... we absolve ourselves of any deaths occurring from introduced or perceived horrors.