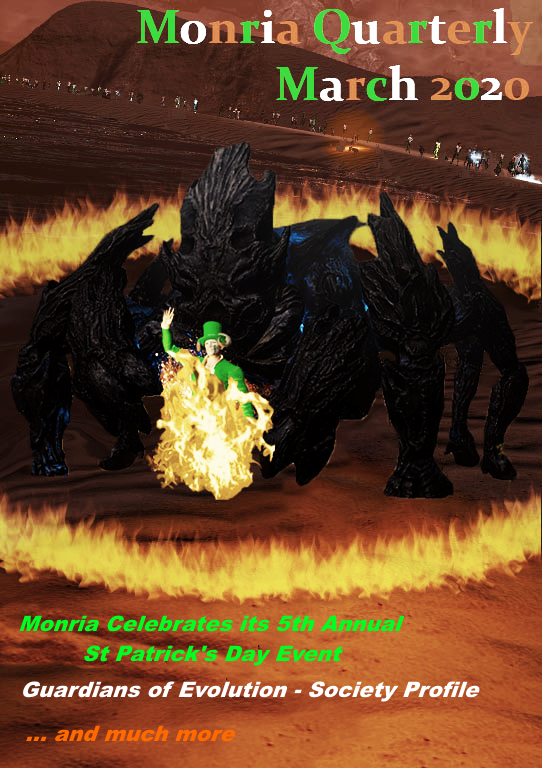 Anny and I are very pleased to present our second issue of the Monria Quarterly magazine. March's issue is focused on our annual St Patrick's Day Event, with a few other articles thrown in, and of course we couldn't forget the fun stuff ... there's always room for fun stuff.

We may still make a few more tweaks to this issue, but the PDF file will be replaced if we do. This issue is also much shorter than the launch issue because the launch issue was all about introducing and telling the story about Monria. Future issues will most likely be between 25-35 pages depending on topics chosen, but there will always be an assortment of information and entertainment.

Here is the link to access the PDF file for viewing and downloading:
Monria Quarterly - March 2020

If you download the PDF and want to view it in proper two-page view, do the following:
Thank you for your support while we were eyeball-deep in this project.

I just finished it and I love the way you include links.

And I learnt some new stuff too WOW

I can't wait for the next one

A super read again, tx DME and the team who created it, kudos

In regards to 'Dunny' (as the Dunwich Horror is now lovingly and respectfully referred to ), I was there the first time he spawned.

I was grinding away at Yogs in the crater where he spawns, and as is usual when grinding for a while with no globals my situational awareness was at a low level

Without realizing that the other yogs had disappeared I went for the nearest Yog with my Dehera Sword, fully expecting to slice and dice my way through another Yog. I whacked it once, and suddenly and shockingly ended up on the floor with the old Skull and Crossbones hovering over me.

After reviving (and needing an instant nappy change), I checked my stats and discovered I had been hit once for 276 damage, obviously by a 'special', and thus far, an unknown Yog. Naturally I called in assistance to finish him off.

Now the revenge hat is on, war has been declared and whenever i am online and Dunny spawns, it is a fight to the, ahem, several deaths

So the St Patricks day event, already a special day I look forward to every year, now has an extra special albeit embarrassing memory, which I will treasure for the rest of my days, tx again to the Monria team

Gl, HOF and ATH everyone,

And glad you enjoyed the second issue of the Monria Quarterly ... the third issue is coming up the end of June.

Staff member
Moderator
Official Moon Shopper
Virtualsense Media Team
Nice one CM I didn't realise you were the first to see him spawn, I bet it was a total shock, but a cool experience
I ran into him by accident one day, and he wrecked my car and killed me outright.