Another part of my diary was released, Going to kill someone soon, this is too much!!!
I need to put a bounty on this thief or something...

With that, it was time to think over my life. I relocated my Studio to Monria. This way I could continue my activity as a reporter. It was the best option as a new member of the Monria Media Team.

I have to make weekly visits to Arkadia because I kept some of my commitments there andd things I don’t want to give up. One of most important is my duties in KISS.

Anyway, with Monria Media Team, my studio, and all the plots arising on Monria, my hands were pretty full on this side of the galaxy.

DQSI is a very important job to me also. I spent much of my time researching and exploring space, and being able to keep that activity even if more focused on Monria, it will fulfill some of my needs. Working side by side with Oberon NightSeer is just by itself a great pleasure.

First day at work​
My first official day at DQSI and a major time-space disruption occurred. What better way to start a new job than to have to issue a Major Alert. Oh well, could be worse…

Monria November 14, 3014
The Cost of Romance​
Just another day starting, and as usual I did my dialy workout. I have been doing this for a couple of months now, first because it is a good way to exercise, but I also used this daily exercise to follow something strange that came to my attention several months ago. Every now and then weapons are found in strange places across Monria. Today, to my surprise, the mystery was revealed. Best way to write this down is to attach the report I made to Dark Moon Enigma.

Dreams, Playing with the Gods.​
It's been a while since I've written about my dreams. Not that they don't happen anymore, just the opposite. It's a regular thing now, but I got used to them. Some days, especially when I am very tired after a long day of work it can be a little overwhelming. "Sleeping" in an induced state of hypnosis doesn't allow the conscious part of the brain to be turned off completely during the sleep. The so-called deep sleep doesn't happen if "someone" tries to induce dreams while in the hypnotic state. The result is sometimes I have very little rest; the real sleep time is not enough.

I truly understand now what that Cyrene little girl meant when she said, "playing with Gods."

But all of this was leading nowhere. Well, not exactly. Just being able to avoid Nyarlathotep's deception and not go nuts is already by itself something very important, but if I could take something more from this I believe I should try.

I just can't ask where Cthulhu is, or what his intentions are, because this would clearly expose that I am in control of the dreams, and things could go really wrong. During these dreams, I constantly hear chants in a strange language, and words that I don’t recognize in the strange places the dreams take me to. I know that it is called R'Lyehian, and is humanly impossible to reproduce it. Aliens created the language whose vocal organs were not like man's, so there is no relationship to human speech. Still I might be abe to read and understand.

With that in mind, I started to "drop" subtle hints in hope that Nyarlathotep could see it was profitable to him that I knew this language.

This effort was successful, and for several weeks now he has been "teaching" me R'Lyehian. It's possible that if I weren't in this hypnotic state, things would go faster, but then I would probably be mad by now.

Monria November 18, 3014
Esoteric Order of Dagon Summons Evil with Cultist Chaos​
The Leader of the Esoteric Order of Dagon has been very active. I knew something was about to happen since I recorded the surveillance video, but my investigation showed me that I was wrong in the assumption that Yogs are involved. The evil priest Lee Negated summoned Dagon and Hydra, so together they could channel Cthulhu and that way control the Cultists.

I was able to get this information in time to warn DME to prepare the Moon's loyal fighters for battle, but unfortunately, not soon enough to avoid it. 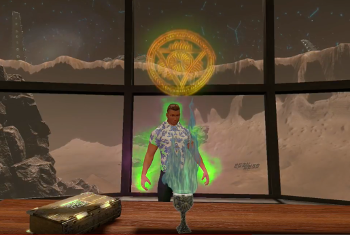 Dead end, but still a small hope.​
During my research about these deities that kept by all means haunting the Monria community, I found an article from the Monria Daily Press regarding the discovery of an ancient file cabinet buried inside a metal casing in the old West Crater.

Now, this entire thing made me think. First, how the hell a cabinet inside a metal casing turns up buried in a Monria Crater? How did it get there? And if it was from Earth, how was it transported to Monria?

It became clear that I needed more sources of information because I wasn't privileged to review any of the documentation found in the file cabinet secured at the DSEC Forensics Lab by DME.

I started searching the DSEC Network for information about people in old Earth that could know more. Possibly no one alive, but maybe I could track some descendants that had documentation that could help.

In my research I found a name that got my attention, not because of his name but what he did.

"Laban Shrewsbury, an anthropologist and professor of philosophy at Miskatonic University who disappeared for twenty years." Further notes shown that Professor Laban Shrewsbury and his companions traveled to Celaeno to escape Cthulhu's minions.

That was something worth following. Cthulhu, the Miskatonic University and most important Celaeno, a distant sun, is where the biggest library of alien literature known to man resides. Rumours say that on its shelves are secrets stolen from the Great Old Ones and Elder Gods engraved in stone tablets.

However, this brings a new problem. Celaeno or 16 Tauri Star is on the other side of the known universe in the Pleiades cluster. The Great Library of Celaeno is known to be on the fourth planet of that sun. Even if I got authorization to use the Federal Quantum Jump Rail Network, it would take me years to get there. The available option was to send a message to the Celaeno library and hope there is someone there kind enough to reply.

The Space Travel Program is an amazing initiative from the Monria Management Team. It is organized and led by the leadership of the The Knights of Entropia (TKoE). The primary purpose is to provide free scheduled warps to Monria's Monrian Born, as well as Monria citizens who own shops and apartments.

That said, I contacted DarkMoon Enigma, and in conjunction with the project leaders, I was accepted as a Yamato crew member, mostly as gunner and crew support, but in case of need as backup pilot.

​
I awake to my alarm buzzing. I'm already late to work and my head is in the clouds. I was very tired yesterday for sure. After a shower and a quick breakfast I rushed to the DQSI Lab, but never got there. While walking in a fast pace and still trying to figure out why I was feeling so weird, I recalled my dreams from last night. There was nothing unusual at beginning, just Nyarlathotep talking and trying to teach me R'Lyehian, but then, from out of nowhere, I was also speaking R'Lyehian. After I returned home, and after a couple of hours experimenting, I concluded that I indeed was really talking R'Lyehian, not just that gibberish thing that most humans do. I also discovered that it was the Crystal that allowed me to talk R'Lyehian.

I couldn't just walk around with the Crystal in my hands because I would become a target of those watching, so I decided to make a necklace for it. I then went to the jewelry shop to have them create a fake crystal covering to go around the Zoldenite cyrstal. After leaving the jewelry shop, confident that the Zoldenite crystal was now completely concealed, I ran home to write an entry in my diary.

​
This is possibly one of my most important achievements and will be a great tool in my research.

First thing I noticed, or I had already noticed but now I am sure, that the way humans say even the name of the hellish one, has nothing to do with the true sound of it.

But how could I explain this to people? I did a little research and found the way.

Many documents have been written, but the one person with more knowledge about Cthulhu over time was H.P. Lovecraft himself, and explains exactly what I mean. I will write it down so I never forget it.

"The name of the hellish entity was invented by beings whose vocal organs were not like men, hence it has no relation to the human speech equipment.

The syllables were determined by a physiological equipment wholly unlike ours, hence could never be uttered perfectly by human throats ...

The actual sound, as nearly as any human organs could imitate it or human letters record it, may be taken as something like Khlûl' hloo, with the first syllable pronounced gutturally and very thickly. The u is about like that in full; and the first syllable is not unlike klul in sound, hence the h represents the guttural thickness."

I doubt i have to repeat myself?