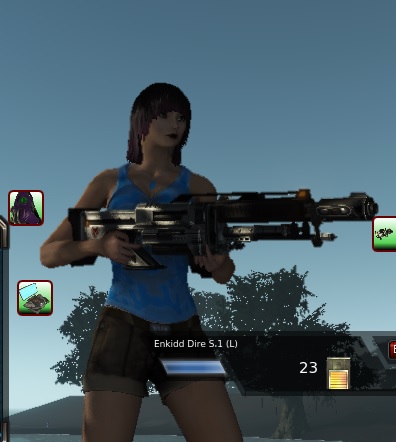 2021 EDIT>
Learning period on weapons has now been changed, and will actually display the Level, instead of YES/NO/NOT ANYMORE/NEVER


The rule of thumb will stay as, Learning period level +5 levels makes you MAXED on that weapon/tool.
Exemple, a weapon recommended level 5, will be maxed, and fully efficient when you reach level 10, both in HIT and DMG.

After seeing so many persons using what i call "PED leaking" guns and FAPs, i decided to try and create a quick "easy to understand" post to learn how to pick a weapon and progress...

Theres TWO different type of guns or FAPs.... They can be L or ULs, but the thing to keep your eye on is the SIB (Skill increase Bonus) 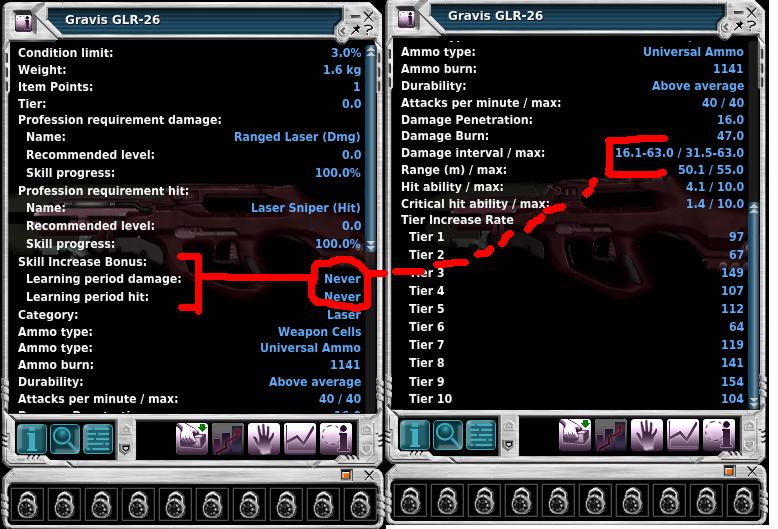 Example 1, the famous Gravis...
Its damage is teasing, its cheap, oh my... you think you NEED it...
Its not cheap for no reason... its a horrible gun. Let me explain..

EVADE and MISS are 2 very different things...
EVADE is Mindark, MISS is your fault.

So in this case, you have a gun doing blunt damage, missing a lot, and using the amount of ammos that a way better gun could use the optimal way, and also hit at a decent way, even removing the MISS factor. This gun will also decay on each blunt shot, evade, and MISS, playing just like if you was hitting with a regular gun.

In the End, you leak ammos, decay, and throw PEDs by the window, and trust me you would be amazed to see at what speed you waste your PED with this. 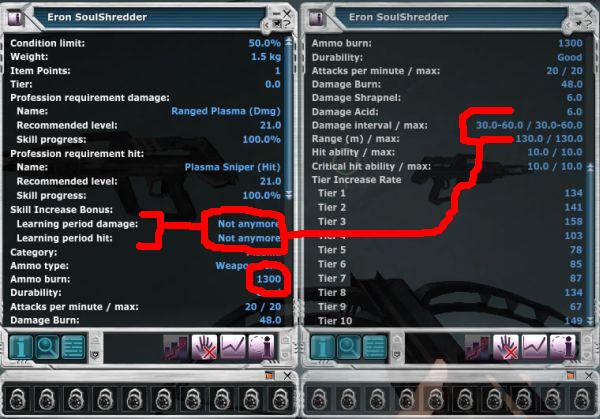 Here i have a SIB saying NOT ANYMORE, which means it existed...
This gun is UL, AND SIB, which is rare, so expensive, expect to count in kilo PEDs the Markup on such a gun.
Dont be scared, Every ULs are not SIB, proof with Gravis up above, but EVERY Limited guns ARE SIB.
Back on this case to compare with Gravis...

SIB saying NOT ANYMORE, which means it existed...
Either NOT YET / YES / NOT ANYMORE means a presence of a SIB

At NOT YET, you wont be able to use the gun, which is the BIG difference with that horrible L.100 guns, that Mindark let you use. It can be useful in some way, but in the purpose of this thread, we say its horrible.

On a SIB gun, you see a RECOMMENDED LEVEL, here is 21.0
Profession is PLASMA SNIPER (HIT) and PLASMA (DMG)

To develop a bit, HIT will be split between Sniper and pistoleer in each damage type (BLP, Laser, Plasma, ...), and DMG is common to both Pistoler and Sniper in each profession. Pay attention to YOUR profession, and try stick at ONE profession. Splitting on either Laser and BLP would make you more flexible, but youll skill slower by do not focusing on one profession.
It a matter of fact, get a jug, serve 4 glasses, drink less, serve 4 times your glass, more for yourself.

VCAT Team Member
Very nice explanation of how it all works E, this is something that I found difficult to understand when I first started so will be very useful for anyone choosing a gun.

When I started playing I was given a freanD delta by my mentor, I have to say I had a lot of fun with that gun lol. I used it a lot despite my mentor explaining the above in detail.

As for sticking with one profession, blp, laser or plasma, or even melee this is a great idea if your aim is to skill up quickly, I chose to skill blp, mf and melee (3 glasses ). I think choosing to stick with one or using several is just down to personal choice really. There are benefits to skilling melee for example such as increased carried weight capacity.
It really just depends on your goals, even skilling on melee, mindforce and blp, I still managed to reach level 60 blp sniper in my first year playing. I would of course be a higher level now if I had concentrated on only blp but back then I found that I would end up stuck without a suitable weapon for my level at times and I didn't have the budget to get an UL gun. Being able to switch to melee when the gun I wanted was unavailable was useful and it kept things interesting for me!

Volunteer Mentor
Yamato Pilot
VCAT Team Member
Toulan Historian
Yes you are absolutly right..
Ididnt talk of melee nor explosives nor Minforces as they are a bit of "another world", and i dont understand fully the melee world nor explosives to go this far explaining. It will come in time and i might develop this in future

I dont Stick at "one" profession myself, but the point i tryied to make is, pick between BLP, laser, or even plasma, even tho plasma is a very expensive stupid idea, is still the path i picked.

Everyone has different goal and playstyle, and i wouldnt dare to tell anyone what to do, but how to do.

Golden rule in EU i think we can agree,
Dont work hard, work wise.
But if you know how to work wise, then you can work hard

VCAT Team Member
I completely agree that choosing between blp, laser and plasma is important, I never saw the point in skilling all three which is why I chose blp. I just kind of always put them as one choice, so when I look at it, its guns, blades and chips with each having their own choices.

Many people dismiss melee and mindforce until later on but melee in particular has a lot of benefits if you use it early on and decent UL melee weapons are more affordable than many of the guns that offer similar dps.

Staff member
Moderator
Community & Media Manager
Virtualsense Media Team
VCAT Team Member
This information is really very helpful, because as a relative newbie, I should have gotten this information from my Mentor, or at least directed to a source where I could become more educated. Talking to me briefly three times and only asking how I was doing without sharing information or guiding me is not a Mentor, which is why I'm so keen on how our Mentors operate on the Moon with our newbies.

I know you have a lot going on Eleni, so thank you for taking the time to explain all of this, it's really appreciated. Also to you Ali for your contributions, and for anyone else who comes into these informative threads to add extra.

Dark Moon Enigma said:
This information is really very helpful, because as a relative newbie, I should have gotten this information from my Mentor, or at least directed to a source where I could become more educated. Talking to me briefly three times and only asking how I was doing without sharing information or guiding me is not a Mentor, which is why I'm so keen on how our Mentors operate on the Moon with our newbies.

I know you have a lot going on Eleni, so thank you for taking the time to explain all of this, it's really appreciated. Also to you Ali for your contributions, and for anyone else who comes into these informative threads to add extra.
Click to expand...

I know the feeling DM, i didnt have the chance to get a decent mentor myself, at least yours checked on you LOL
I had to figure out tons of things by myself and i paid cash for my mistakes.
Fortunatly, fate made me meet very fancy peoples, who, bit by bit, took care to explain me what i ignored, even tho i still ignore a lot...
Indeed im extremly busy but ill keep it coming, as by reading the ongoing chats, i realise bits of every kind of players need enlightment, and its really hard to explain in a busy chat, so such a support as the forum is essential, and i feel that it is vital to create bits of the "how to" in EU.

I moved your thread to the Hunting section Eleni.

Guides & Tutorials were buried in the Beginners Corner and I felt it would be more useful as its own forum section.

There are two weapon comparer tools I find very useful.

The first:
entropia.wiki
It remembers the weapons you compared so you can add the weapons you have and the weapons you are considering buying to the list including various markup values and get back to it at a later date.
On the down side it lacks the ability to see how the weapon will fare with different skill levels.

The second:
Entropedia: Tools: Weapon Compare
This one doesn't remember the weapons you compared but it allows you to insert your skill levels in order to see the effective ECO rating of the weapon based on your own skills.
You must log in or register to reply here.
Share:
Facebook Twitter Reddit Pinterest Tumblr WhatsApp Email Link
Top Bottom