Just saw Gold Key Molten discovered by someone without a crown in a team instance - crackers are still not dropping in solo instances and would not be surprised if something is still missing from loot based on instance cycle thus far.

Particularly wondering if it is intended to be able to run team dungeons and bypass the key part grind? Assuming Not.

From the VU Patch Notes:

There are two Gold instances one is Solo and one is Team. Form the Team Gold instance you can refine the Team key from Golden Molten from the Silver Team Instance and the Solo Key can only be refined from the Parts (the ones that Hally discovered).

The main differences between the Team and Solo Instances:
Here's the list of keys:

The crackers are only available on non instance mobs (so not the CUHOF or Lotus instances).

Thanks for the information.

So, in approximately 21k cycle generating keys and running the instance I have looted a large amount of Bit Key, Bow Key, Collar Key, Post Key, these individually total 22 ped - meaning the 2 undiscovered parts have a sum of 28 ped.

In this time I have formed 2 team keys (as an individual).

This means that as the team size grows with individual farmers the amount of keys generated grows proportionately to be equal to golden keys being assembled several times faster than solo dungeons... and do not need a crown or any prerequisite to enter the instance?

This leaves me under the impression that this armor and plating has even lower drop rate than DSEC pieces (which prior to this VU was the worst in the universe) OR you are about to be the new Cyrene and destroy the armor economy and these will be disabled within a week..

might be interpreted as hyperbole but I don't think so... 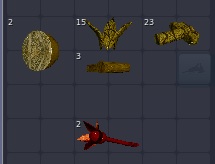 solo parts on top, team keys on bottom, for reference

On the topic of clarification needed for instances... Since you can't form a team and then join the instance and then disband your team like CUHOF (there's a red message: you must have another teammate in range to enter)...

I can't find this information anywhere. How does the loot work with these boxes? Is the loot distributed based on damage dealt? Split evenly? Does the person who used the key get rare items or does the guy doing 5 dps get the same odds of the rare? Does the loot algorithm determine where the rare loot is supposed to go in the case of a 50/50 damage split?

Can you take a group of people and you rotate using keys and each person opens the box in their own instance and gets all the loot? Idk how to do these fairly.

VCAT Team Member
Hope we see the ward part soon, its not from lack of trying so far

VCAT Team Member
Hey Ant, Lotus Wards Key, hasnt dropped a single time yet, could you maybe make super extra sure that its dropable ? I have now upwards of 40+ of some of the other parts, it seems kinda skewed, maybe add a use for those extra parts ? feels bad to tt stuff like that, same goes for the tinture used for the carpet, i have 6 of those and 1 is needed, but only 30+ of the red fragments where i need 1100 ?
You must log in or register to reply here.
Share:
Facebook Twitter Reddit Pinterest Tumblr WhatsApp Email Link
Top Bottom